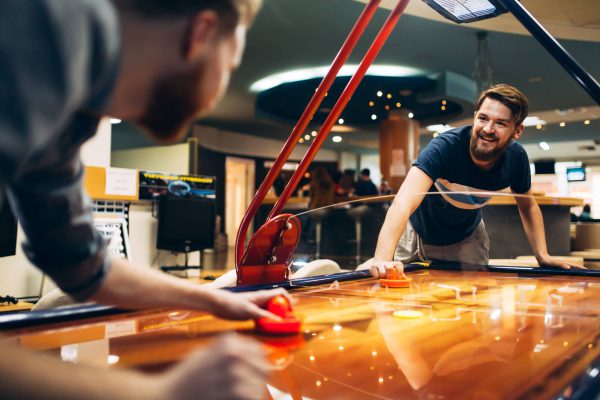 Air hockey is a game played between 2 competing players. The purpose of the game involves scoring points in the goals of the opposing player. The game set includes a table that features a low-friction specialized playing surface.

This fast-paced, entertaining game typically involves a smooth and large playing surface that pushes air through holes in the table to create a frictionless playing area. The field has a rail around it to stop the mallets and puck from slipping off the table.

Air hockey is also a game that encourages each player to get to know more about each other’s weaknesses, vulnerabilities, and strengths. This sport also involves different types of tournaments. Some of these include spinoff or double-elimination tournaments.

The spinoff tournaments involve players having matches with any other player that was eliminated or knocked out of the game. Players can compete with other contestants of a similar skill level. 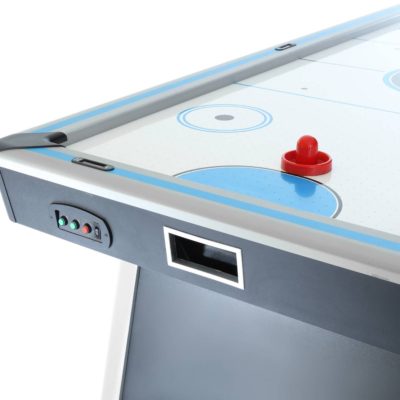 Evolution of the Air Hockey Table

A game designer team from a billiard table producer (Brunswick) initially invented the air hockey table. This team patented the design in the late 1960s and early 1970s. The aim was to design a faster and more exciting game than Pool or Billiards. The game was inspired by ice hockey, as can be seen in almost any modern air hockey table.

The flat and large playfield was first marked with the pitch markings used in ice hockey, with a goal on each end. The tables only featured pucks that could slide, but over time, the playfields began to include perforations with many tiny holes. From here, powerful air currents flowed through the holes with an electric pump. The currents created an “air cushion” for the puck to float on, similar to how the pucks “float” over ice during ice hockey games.

The original air hockey tables also included a vertical pitch made from metal. This edge rebounds the puck as it impacts. The rebound created two unique aspects of this game. The first was the fast-paced, zig-zagging rebound techniques that the top players use, and a trademark “ping” sound that these impacts create.

The players also use “pushers” that also go by the name of “paddles,” “strikers,” or “mallets” to attack opponents and defend their goals. The winner of the game is a player that has managed to score the highest number of goals within a specific time. Alternatively, the player that reaches the goal limit that was pre-agreed at the start of the game can be the winner. The game is commonly played with the first player scoring seven goals to win.

The overall design of these tables has continued over the years. Only the technology and appearance have undergone updates. Today it is also one of the recognized sports in the U.S, with annually held official tournaments, adjudicated by the USAA (United States Table Hockey Association). Outside the U.S, air hockey is not regarded as one of the official sports. Yet, the commercial tables remain one of the mainstays of bars, amusement arcades, and multiple other venues throughout the country. You will commonly find games of air hockey being played next to the various games of pool (see What is the Difference Between Pool, Billiards, and Snooker). The air-hockey tables for home use have also increased in popularity over the years.

Today there are many different makes and models to choose from when it comes to air hockey tables. Investing in a table for a commercial venue, a family game room, or one for the break room in your office allows you to enjoy this fast test of your skills and reaction time whenever you like.

Here is an overview of the different options so that you can decide on the right type of air hockey table for your needs. 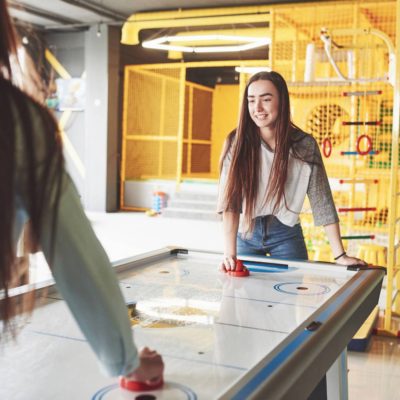 Air hockey tables commonly include commercial tables and home tables. The differences are significant, especially when it comes to performance and price.

The design of the tables intended for home is commonly for light use, where the priority includes excellent value and a fun game. In most cases, the home table options often do not exceed 6 feet, although it is possible to find 7-foot models (see Air Hockey Table Sizes and Dimensions for more). The fans in these tables feature reasonable power with the ability to raise the puck onto a “cushion of air” for a fast, smooth, gliding action.

Arcade standards are commonly followed when building tables for commercial use. The high build standards mean they are well-engineered, robust, and made to provide players with an excellent experience. They come with powerful and high-performance fan motors that create just the right amount of uplift.

The construction of the home and commercial tables differ significantly. The arcade tables are typically made from a solid ply along with a playing surface made from stainless steel. Solid steel makes up the rails for further support. These tables also usually feature arches that stretch above the table along with a mounted scoring unit. The airflow fans are centrifugal and robust, made to provide continuous airflow for endless hours of usage.

The home air hockey tables are usually more lightweight and feature a lighter MDF construction, which makes them easier to maintain and manage. Most home tables use basic flat fans, but some come with centrifugal fans like the ones found in the commercial air hockey tables.

The higher-quality home tables also include mounted scorers and an arch, but most don’t. These tables usually mount the smaller scoring units to the side of a playfield.

How to Decide on the Perfect Table

The ideal way to decide which table matches up to your requirements is to think about how often you plan to use your air hockey table and what type of players will use it. For example, if you are buying a table for young children, a basic spect 5ft, or 6ft table is best. The costly electronic scorer is replaced by a standard abacus-style scorer, while the height or the size of the air hockey table should also match up to the players. The bigger 6ft or 7ft tables for home use are ideal for older children and adults.

If you are using an air hockey table at the office or in a commercial venue, it is better to consider the more robust commercial tables, especially if you plan to charge players for gaming credits. 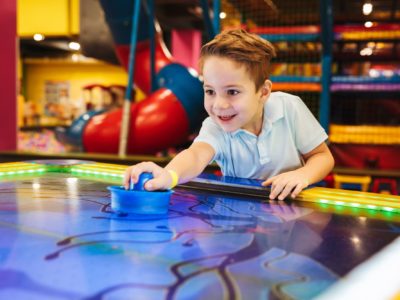 The History Of Air Hockey

Air hockey is a fascinating game for those who want to have a bit of fun with family and friends. It is a game that has been around for decades and continues to be a show-stopper when it comes to entertaining people and creating a competitive environment. When it first started, air hockey was seen […] 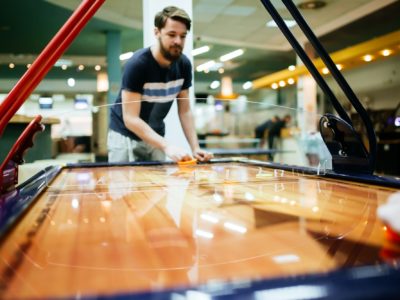 Air hockey is an incredibly simple yet complex game. On the surface, your mission is to get the puck into the other person’s goal. While you wouldn’t necessarily think there are nuances to the game, there is a lot of complexity that goes into playing it competitively. If you are looking to step up your […] 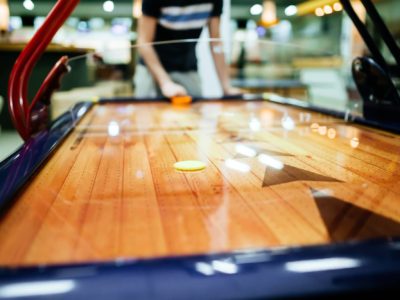 To master the game of air hockey, you will need to learn to out-think and out-maneuver your opponent. To do this you will need to master two important plays: drifting the puck and lining up trick shots. Here is what you need to know about fine-tuning your offensive game. Let’s start at the beginning and […] 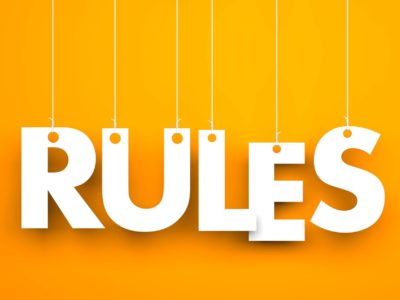 Air Hockey Rules – How To Play The Game

Air hockey is one of the oldest and finest arcade games you will find out there. If you are looking to get into playing some good ole fashioned air hockey (learn about the history of air hockey), you’ll want to acquaint yourself with some of the rules of getting started. Below, you’ll find some of […] 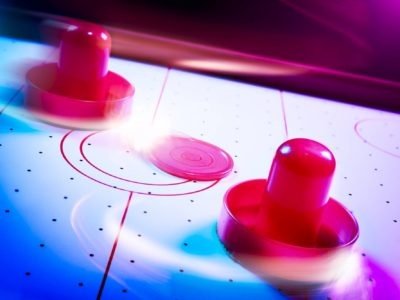 How to Make an Air Hockey Table Slide Better

Anyone can play this game no matter how great skill or how little skill they have. It just takes two people to have a great game and one extra person is easier to find than 5 or more when you want to play other games. To get the most enjoyment out of air hockey you […] 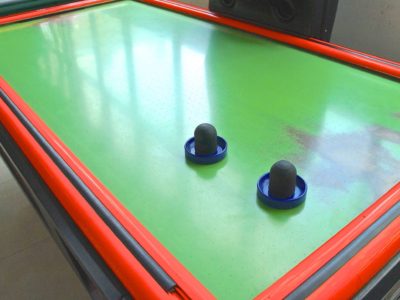 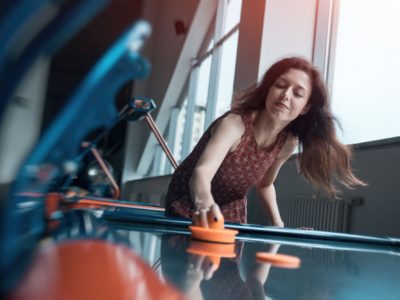 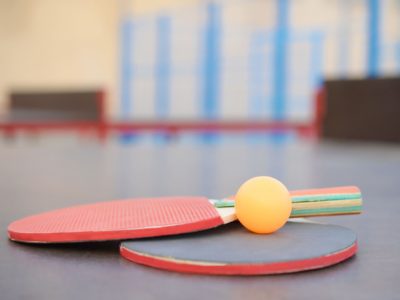 Air Hockey and Ping Pong (Table Tennis) are two cherished games that have been played across the world for many years. Unfortunately, these two games commonly require a large area to fit their respective tables. This is especially true if you have limited space in your home gaming area. As these games have risen in... 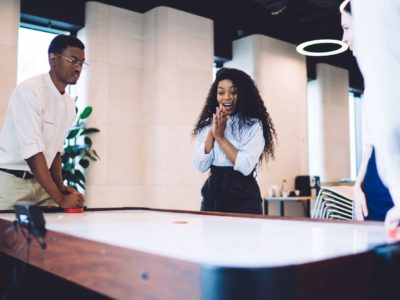 Playing a competitive game of Air Hockey in an arcade is a cherished memory for many. Adults and children alike can have mountains of fun while playing. Many prefer to have their own air hockey table that is more convenient than making a trip to the nearest gaming center. Fortunately, as the price of home... 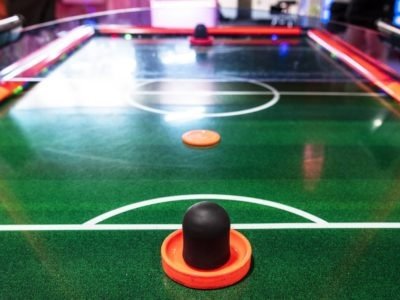 Air hockey is an excellent form of entertainment for the entire family. Normally, a quick trip to the arcade will have you playing on high-quality tables in no time. If you are wanting to make playing air hockey a little more convenient, having one in the home is a great idea for many. Unfortunately, those... 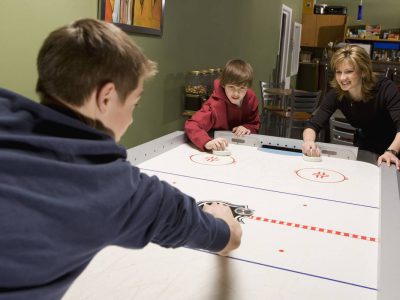 Who doesn’t love a good game of air hockey with friends? Air hockey has been a favorite of arcade goers for many years as its popularity had grown since its inception more than 40 years ago. As it has become more popular, it is increasingly common to find one of these tables in homes for... 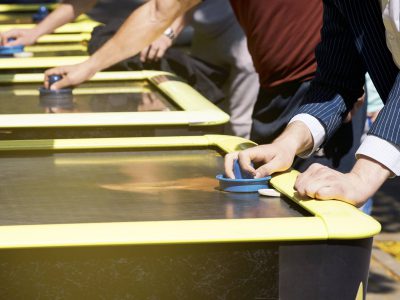 Air hockey has been a popular staple in game rooms around the world for almost 60 years. Over time, these fun games have made their way into people’s homes everywhere. The simplicity and competitive nature of air hockey make this a perfect addition to any game room. Air hockey is flexible enough for almost any...